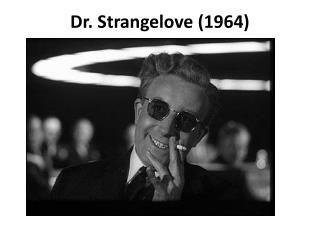 Dr. Strangelove (1964). Peter George’s Red Alert , a serious suspense thriller about an accidental nuclear attack. Kubrick felt the subject matter needed to be dramatized but could not make it work, finally decided to make it a black comedy, “a nightmare comedy” (p.703). Dr. Strangelove - . or how i learned to stop worrying and love the bomb. the war room. directed by stanley kubrick

The Beatles 1964 - Two fans try out their beatles wigs in anticipation of the british group's arrival in new york, 6