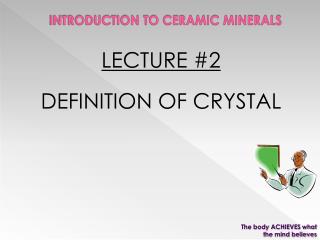 INTRODUCTION TO CERAMIC MINERALS. LECTURE #2 DEFINITION OF CRYSTAL. The body ACHIEVES what the mind believes. LEARNING OUTCOME. At the end of the lesson, students should be able to : Write the definition of crystal. Recognize crystal material and non-crystal material. Introduction to minerals and rocks - . guiding questions. what fundamental principles guide geologists as they

Atoms to Minerals - . matter and atoms. chapter 5 section 1. what is matter?. matter is anything that has mass and

How To Identify Minerals… - . hardness. mohs hardness scale – ranks ten minerals from softest to hardest. 1 is

How to Identify Minerals… - . why should we know about minerals?. diet &amp; nutrition calcium, chlorine ,

Minerals - . what is a mineral?. a naturally occurring, inorganic solid, with a definite structure and composition.

Minerals - . one of micronutrient substances . these elements deposited in the rock ,go to soil, then to plants , animal