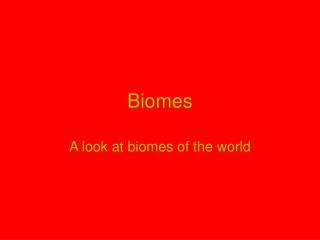 Biomes. A look at biomes of the world. Biogeography. Biogeography – the study of where organisms live. Alfred Russell Wallace pioneered biogeography and was a friend of Charles Darwin. How do organisms get to where they are? . Biomes - . a biome is an area or region with a specific climate and the life forms that live there. gather information

Biomes - . chapter 6. what is a biome?. biome- large region characterized by a specific type of climate and certain types

Biomes - . climate and biomes. what is a biome?. a biome is a group of land ecosystems with similar climates and