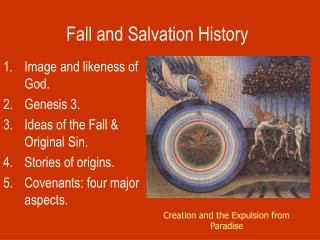 Fall and Salvation History. Image and likeness of God. Genesis 3. Ideas of the Fall & Original Sin. Stories of origins. Covenants: four major aspects. Creation and the Expulsion from Paradise. Core Christian beliefs about creation. God created the world by his Word. Salvation History - From the judges to the church. salvation history. early structures of leadership. when the israelites

Salvation History And The Sacraments - . god has a plan and stuff matters!. salvation history. in the beginning. the

Mary in Salvation History - . mary is the defense against all

Joshua as Salvation History - . the exodus from egypt was just one half of god’s redemptive plan for israel. god

Salvation and Communion - . what do christians mean by salvation?. 2 mins with a partner come up with a definition.

Snakes and Salvation - . numbers 21:4-9. familiar story. i am sure most of you have heard of this story israel complained

Salvation and Redemption - . how near is the end?. heaven reconciliation between humans and god enlightenment wholeness.

Forgiveness and Salvation - The human condition: human beings were created good by god but they suffer and die because

Forgiveness and Salvation - . a prequel to fellowship pt. 1. www.fellowshipofyah.org

SALVATION AND REDEMPTION - . what does it mean?. sal·va·tion n. 1. a. preservation or deliverance from destruction,