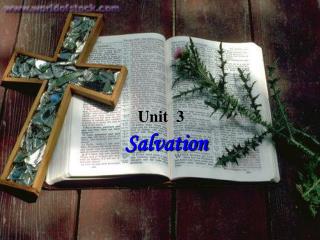 Unit 3. Salvation. What does “ salvation ” mean?. the state of having one ’ s soul saved from sin. save. -- set free from the eternal punishment for sin. sin. -- breaking of God’s laws; disobedience to God’s will. revival. SALVATION - . mans need was for salvation salvation represents the mission of the savior, and the purpose and plan of

SALVATION - . justification. past. sanctification. present. future. glorification. were… are being… will be saved. by

SALVATION - Baptist training institute. salvation. john 3:16 16 for god so loved the world, that he gave his only