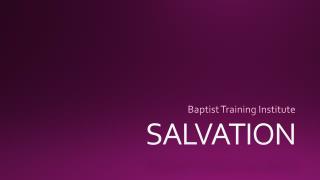 Baptist Training Institute. SALVATION. John 3:16 16 For God so loved the world, that he gave his only begotten Son, that whosoever believeth in him should not perish, but have everlasting life. Salvation - Unit 3. salvation. what does “ salvation ” mean?. the state of having one ’ s soul saved from sin.

SALVATION - . mans need was for salvation salvation represents the mission of the savior, and the purpose and plan of

SALVATION - . justification. past. sanctification. present. future. glorification. were… are being… will be saved. by