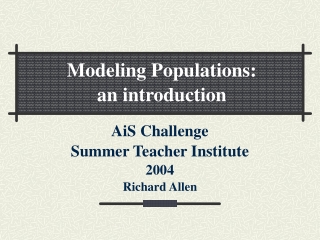 Center for International Studies Summer Teacher Institute - . 1. teaching economics 2. a lens through which to look at

Richard Allen - . by jon white. who is. born february 14, 1760 he belonged to benjamin chew who was a lawyer but allen

Summer 2014 Get Organized Challenge #5 - Memorabilia , journaling notes and creating a “holding album”. this

On Becoming a Scholarly Teacher - . 2011 cte summer institute on teaching &amp; learning. objectives. by the end of

The Challenge of Ensuring Teacher Quality and Supply - . nancy a. doorey presented to: pennsylvania conference on teacher

Preparing for Poster Day 2004 - . a workshop for summer interns at the national institute on aging by cherilynn m.