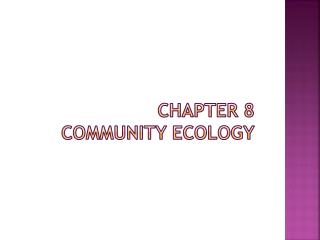 Ecology is The study of the distribution and abundance of organisms, AND - The flows of energy and materials between

Oral Microbial Ecology - . ecology. ecology  (from greek) is the scientific study of interactions among organisms and

Population Ecology and the Distribution of Organisms - . 0. 40. overview: discovering ecology. ecology is the scientific

Biology 2.6 - Ecology - . “the study of how organisms interact with each other and their physical environment”.

Review of the Ecology Unit - . post falls high school biology. what is ecology? the. ecology- the study of interactions

Ecology is: - . the study of the interactions among organisms and their interrelationships with the physical environment.

Community Ecology - . reading: freeman, chapter 50, 53. what is a community?. a community is an assemblage of plant and

Ecology - . i. vocabulary:. ecology - the scientific study of interaction between organism and their environments. i.