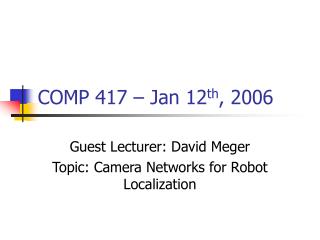 Comp@P1 Shifts and LHC - . large collisions have not occurred quite yet seem to have other issues than collisions

COMP 2903 A35 – In Search of a PC for the People - . danny silver jsocs, acadia university. bruce einhorn business

Workers Comp Overview for Supervisors - . being a good steward of army’s employees and money. cost of workers comp .