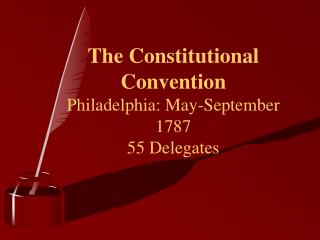 A Warm Welcome to all Members, Delegates and Guests - Federation of european explosives manufacturers 37 th annual

AARC House of Delegates Orientation - . mission. - serve as a representative body of the general membership and

MIRACLE IN PHILADEPHIA: - . the constitutional convention. a meeting of the minds. &quot;tis done! . . . we have

Constitution Test Review - . what was the name of the first constitution?. the articles of confederation. why didn’t

The U.S. Constitution and the New Republic - . themes. the first constitution’s achievements and problems the

the us constitution - . layin ’ down the law. by mr. heberer. table of contents. the task. the articles of

With Liberty and Justice, the Federal Government - . let’s review. what was the nation’s first constitution called?.

THIS - . is. jeopardy. your. with. host. mr. b. jeopardy. the new nation. taxation without representation. french and