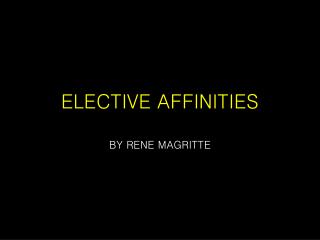 ELECTIVE AFFINITIES. BY RENE MAGRITTE. BACKGROUND INFO. Created in 1933, in Belgium by surrealist painter Rene Magritte When asked about the painting, Magritte said: Elective Model - . high school pe can also be done in middle school. q &amp; a: what were some of your experiences