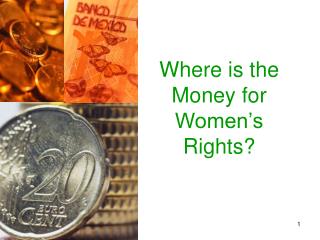 Where is the Money for Women’s Rights?. An AWID Action-Research Project in collaboration with Just Associates. Objectives. Clarify how women’s organizations are faring in the current funding context Highlight key trends, challenges, opportunities within different funding sectors Female foeticide - Some of the worst gender ratios, indicating gross violation of women’s rights, are found in south

” - HENRIK IBSEN - “ i am not even quite sure what women ’ s rights really are. to me it has been a question of