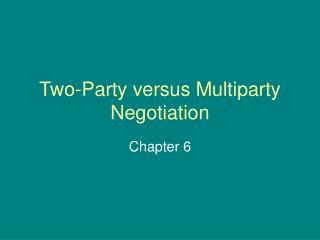 Two Party System - . #apush. learning goal : students will be able to describe the typical whig voter in the 1840s. 2

Two Party System - . what did george washington think about the party system? summarize each of these quotes from

Secure Multiparty Computation - Motivation. general framework for describing computation between parties who do not trust

NEGOTIATION TERMINOLOGY NEGOTIATION - . a process where two or more parties work to reach a joint agreement on issues of

Negotiation - . tips #13. background. negotiation is a process in which two or more parties exchange goods or services

Negotiation - What is negotiation?. negotiation: win-win situationsgive- and take processcontext around the