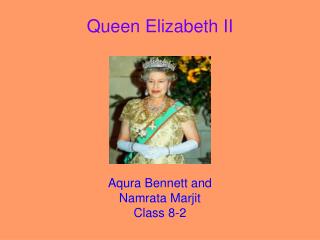 Prince Philip to step down from royal duties - Prince philip, the 95-year-old husband of britain's queen elizabeth, will

Her Majesty Queen Elizabeth II - . was born on april 21 st in 1926; was married to prince philip, the duke of edinburgh,

Queen Elizabeth II - . the queen’s early life. the duke and duchess of york with princess elizabeth. the queen’s

The Royal Family - . what do you know about the royal family?. the queen. queen elizabeth ii born: 21 april, 1926 queen

Her Majesty – Queen Elizabeth the II - . the presentation is made by krichevtsova s.f., a teacher of the english

Elizabeth II - . history. her majesty the queen. the queen is the head of state of the uk she was born on the 21 of april

Queen and Reigne of Romania - . first queen of romania, wife of carol i of hohenzollern, the first romanian king, was a