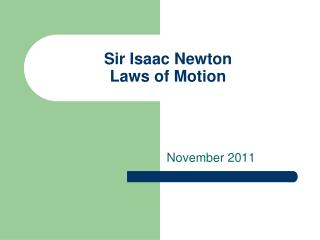 Sir Isaac Newton Laws of Motion. November 2011. 1. Described 3 laws that relate forces to motion 2. Force -a push or a pull, all forces have size and direction. Sir Isaac Newton. Vocabulary. 1. Friction - a force that opposes motion between 2 objects that are touching Sir Isaac Newton - . was born 4 january 1643. in the country woolsthorpe ,. newton gave us a lot of discoveries. the most

Sir Isaac Newton - . background information. born in december 23, 1642 he was a premature baby and wasn’t expected to