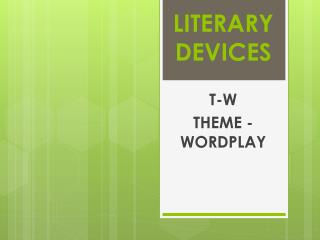 T W I T T E R - . most effective and popular social networking site. how to use twitter?. type www.twitter.com in your

T HE W ORLD - . the world map on this slide is currently ‘grouped’ together with no place names. this is good for

N. W. T. A. - N. w. t. a. www.supportnwta.com. support. the activity of providing for or maintaining by supplying with

Karl W. T. Weierstrass - . by: corbin edwards. birth and death. he was born in ostenfelde in germany. date of birth was

Wordplay: Re-thinking Grammar and Writing - Where have we been?. grammar taught as a process of labelling and

Wordplay cover analysis By Alex Part - . layout. the mast head is positioned in the centre to tell the reader what

Puzzles and wordplay in the language classroom - . edmund dudley. a question…. ambigram. why this topic?. early