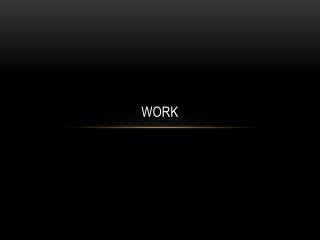 Work. Work happens when a force causes an object to move through a displacement . Be careful with this definition. Some people incorrectly assume that it means a force is work. Instead , what it really means is that a force exerted on an object can cause work to happen. Work ! - . review of scalar product of vectors work by a constant force work by a varying force example: a spring. serway

Work - . hard work?. true or false, did you do work on the object listed? you hold a book in one hand while standing for

Work - . work is the product of the force and the distance through which the object moves. w = f x d. work in order for

WORK - . a force that causes a displacement of an object does work on the object. w = f d work is done if the object

Work - . work done is a measure of the energy transferred. e.g. when lifting a pencil i do work against the earth’s

Work.. - Work. what is it?. definition . work is the transfer of energy through motion work = force x distance. work

Work - . when a force acts upon an object to cause a displacement of the object, it is said that work was done upon the

Work - . chapter 2. key question: what is “work” and how does it occur? main points: simple machines are an important

Work - . work : using a force for a distance w = f x d the work done by forces on an object = changes in energy