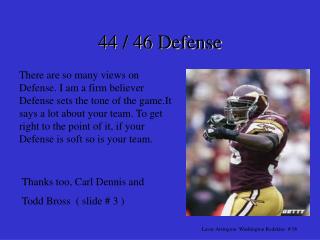 44 / 46 Defense. There are so many views on Defense. I am a firm believer Defense sets the tone of the game.It says a lot about your team. To get right to the point of it, if your Defense is soft so is your team. Thanks too, Carl Dennis and Todd Bross ( slide # 3 ). M.S. Thesis Presentation - . alex dekhtyar for csc 590. we will talk about. logistics of m.s. defense structure of

The Bodies Defense - . “ d- “. lymphatic system system of canals and filters that purify the blood. old rbcs and

THE TENANT’S GUIDE TO EVICTION DEFENSE - . overview. this section of the training will give you information on

The Immune System - . chapter 15. objectives of chapter 15. to understand the: major lines of immune defense mechanisms