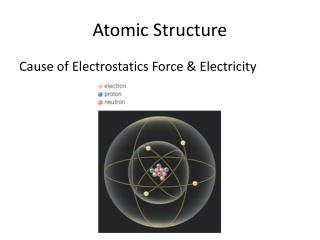 Atomic Structure. Cause of Electrostatics Force & Electricity. Atom History. Atom Comes from “atomos” Democritus first developed the theory of an indivisible part of matter Survived for almost 2000 years. Greek Model. Atoms were spherical particles that are indivisible forms of matter Atomic Physics - . chapter 28. atomic models. introduction. how do neon signs work?. our main focus will be on the

ATOMIC STRUCTURE - Ch. 3. atomic structure. sizing up the atom. elements are able to be subdivided into smaller and