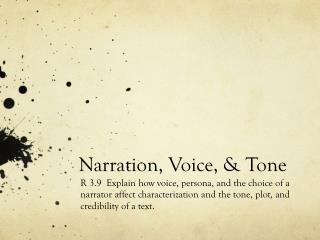 Narration, Voice, & Tone. R 3.9  Explain how voice, persona, and the choice of a narrator affect characterization and the tone, plot, and credibility of a text. . Narration: An Overview. TONE vs. MOOD - . tone is the writer’s attitude toward a subject. mood is the way that you feel when you are reading.

Tone Units, Stress and Intonation - . tone unit. an utterance may be spoken as a single tone unit or it may be broken

Voice Evacuation - . an introduction. please note: this presentation has been formatted to enable easy download and email

Elements of a Story - Setting.*** time and place. character . protagonist*** and supporting characters. round vs. flat.

Adding Narration or Sound Recording in PowerPoint Presentations - . your logo here. create and save a powerpoint