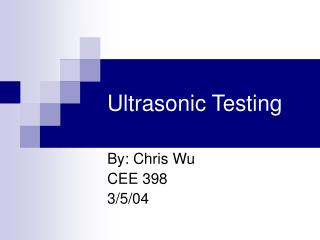 Ultrasonic Testing . By: Chris Wu CEE 398 3/5/04. Introduction . High-frequency sound waves are sent out at a material to find material changes A pulser produces an electrical pulse that causes a piezoelectric transducer to send out a sound wave Ultrasonic Testing – Some Basic Information - Inspecting a structure for defects, flaws, and other issues can be

ULTRASONIC CLEANERS - . ultrasonic cleaners. primary users it is the responsibility of the central sterile section (css)

ULTRASONIC THERAPY - . objective without reference, identify at least four out of six principles pertaining to the

ULTRASONIC WELDING - . definition of ultrasonic welding. a solid state welding process in which coalescence is produced