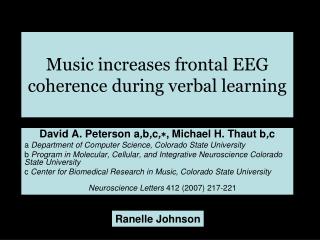 EEG Patterns During Sleep - . the neural origin of sleep

Verbal and Non-verbal Messages during an Interview - . presented to dfw-teng wed aug 11, 2010 by doug matzke , ph.d.

Music During Vietnam - . by: emmanuel alvarez. the doors – unknown soldier. lyrics. comparison. in the things they

Non- Verbal Learning Disabilities - . about nld. not well defined or agreed upon by the experts. closely related to

Frontal Cortex - . frontal lobes. traditionally considered to be the seat of intelligence. this is probably because: the

Music and Learning - The effect of engagement with music on cognitive and performance abilities. music and learning. two

Music and Learning - . philip dallmayr s574 project one blog . watching. i wanted to something with music my