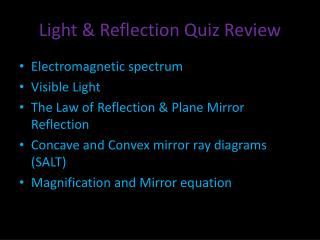 CHAPTER 22: Geometrical optics (4 Hours) - The study of light based on the assumption that light travels in straight

EECC551 Exam Review - . 4 questions out of 6 questions (must answer first 2 questions and 2 from remaining 4) instruction

Three Doors to Spiritual Reflection - . ethnographic research on the role of emotion, images and sacred texts in

Light Scattering - . a classical electrodynamics view. introduction. light scattering is the dispersal of light in

Total Internal Reflection - . refraction (bending) of light. sunlight shines down into the water ray a comes from

Light Ray, Light Ray - No light, no sight. light ray, light ray. a cruise through the wonderful world of reflection and