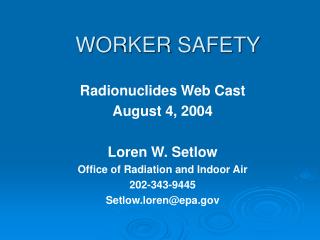 Worker safety - . by chris homa. why do we have heath and safety for workers? . there are meany health problems with

Worker Safety - By nathan lowe. worker safety . why do we have health and safety for workers?. there are many health

Worker Safety - . do workers have a right to a reasonably safe work environment? what does that right entail? what

WORKER HEALTH AND SAFETY PATIENTCARE: - ?our workplace has thought about moving to safer devices to prevent needlestick