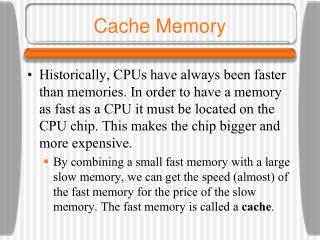 Cache Memory. Historically, CPUs have always been faster than memories. In order to have a memory as fast as a CPU it must be located on the CPU chip. This makes the chip bigger and more expensive. Cache Memory - . objectives. discuss the types of cache describe the characteristics of the computer memory system