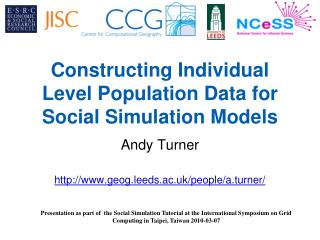 Population Models - . what is a population? populations are dynamic what factors directly impact dynamics birth, death,

INDIVIDUAL-LEVEL ANALYSIS - . focus of the study are the human as a species and as individuals. people who make policy.

Population-level Ecology - . how individual actions “add up” to whole-population performance. a metapopulation is

Social Simulation - . by: yasu gomez. forget makeup or surgery, we have computers!. at a click of a mouse or button, you