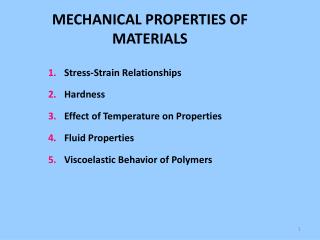 MECHANICAL PROPERTIES OF MATERIALS - . thursday, 3 march 2005. mechanical properties and testing of materials. the

Mechanical properties of materials - . by dr. reham mohammed abdallah. items to be covered introduction on mechanical

Chapter 3 Mechanical Properties of Materials - . obtaining stress and strain values from testing. the nominal or

The Mechanical Properties of Viscoelastic Materials - . -have a basic understanding of the mechanisms of creep -know

CHAPTER 6: MECHANICAL PROPERTIES - . issues to address. • stress and strain : what are they and why are they used