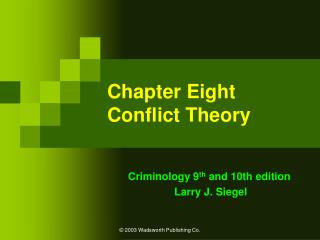 Chapter Eight Conflict Theory. Criminology 9 th and 10th edition Larry J. Siegel. CONFLICT. Criminologists who view crime as a function of social conflict and economic rivalry are aligned with a number of schools of thought, referred to as:. CRITICAL. MARXIST. RADICAL. Chapter 10:Conflict Theory - . rise of conflict theory. based upon marxist ideals and thoughts revitalized in the 1950

Conflict Theory - . competition for scarce resources how the elite control the poor and weak focuses mainly on the

Conflict Theory - . rise of conflict theory. based upon marxist ideals and thoughts revitalized in the 1950’s by many

Conflict Theory - . help, help, i’m being oppressed!. conflict versus consensus. as a view of society as an explanation

CHAPTER EIGHT : Managing Conflict in the Small Group - . what is conflict?. an expressed struggle between at least two