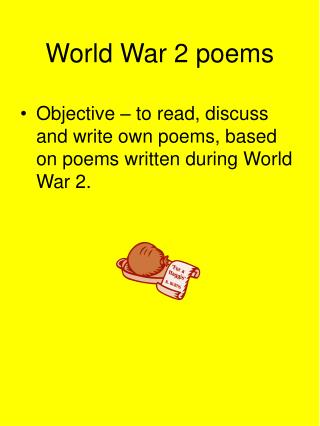 World War 2 poems. Objective – to read, discuss and write own poems, based on poems written during World War 2. Lesson 1 Read the following examples of World War 2 poems. Discuss each, using the questions that follow the poems. SKIES ABOVE  -  Author Unknown

The Stranger Day 1 - . students need paper, pencil, textbook, and practice book. you will listen to two poems about the

Acrostic Poem Acrostics are poems that go down and across. The poems don’t have - To rhyme, and they can have as many

Comparing and contrasting Poems - . william blake. choose any two poems that we have studied so far…. think

MacCaig poetry - . comparing two poems. no matter which two poems you selected, you should have found some of the

Finding Similes and Metaphors in Poems - . many poems are brought to life through the use of smiles and metaphors. the

Poetry - There are many different types of poems. some poems rhyme; some do not. some are only a few words long, while

Samuel Taylor Coleridge 1772 - Conversation poems are poems in which the speaker addresses his lines ... these include