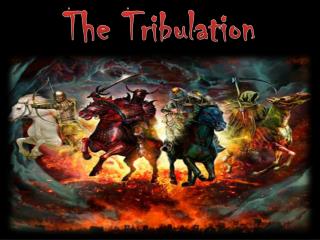 The Tribulation. THE BLOWING OF 7 TRUMPETS. U N L O C K I N G. THE. B I B L E. Key #1 The proper understanding of some crucial books. The Pre-Tribulation Rapture (A Sober Edification from the Word of God) - January 2014. the pre-tribulation rapture (a

The Tribulation - . the blowing of 7 trumpets . the angel with… . …the little book . i. the mysterious

The Revelation of Jesus Christ - . biblical church history . following the hand of god and the hand of satan . the

The Tribulation - . revelation 13. i. the description of a savior (anti christ). c. a plethora of titles of the

The ANTI-Christ Conspiracy! - . acharya s. refuted! ms. murdock is no guru nor a religious expert! yet wildly popular

The Revelation of Jesus Christ - . the past chapters 1-3 covers history from 90 ad - rapture of the church . the present

PATTERNS II - 1. patterns ii. 2. the coming of elijah. mal 4:5 5 behold, i will send you elijah the prophet before the

Romans 8 - . the believer’s freedom from condemnation, our privilege as children of yahweh, our hope in tribulation,

The Tribulation - . the blowing of 7 trumpets . chapter. the final trumpet . the teaching of the rebuilding of the