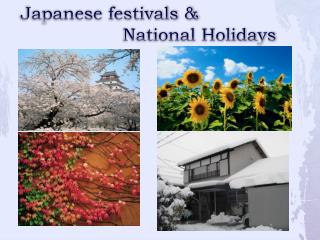 Japanese festivals & National Holidays. Spring. Hinamatsuri (The girl’s Festival). The Girls’ Festival is a celebration for girls held on March 3 rd , during which the girls’ healthy and happy future is wished for. Importance of Festivals - Significance of festivals yet bustling nature of individuals with their pressed calendar,

Fairs and Festivals of Gujarat - The festivals and fairs of gujarat state are carried out with lots of fun, enjoyment and

Hina Matsuri - . march the 3rd. the 3 rd of march is hina matsuri day which also means dolls festival. it is also called

Japanese Festivals - . back to homepage. japanese festivals background. japan has an abundance of local

RELIGIOUS AND NATIONAL FESTIVALS IN TURKEY - . religious festivals. the feast of the

Japanese Festivals and National Holidays - . spring is the beginning of a year. it’s so warm and comfortable season