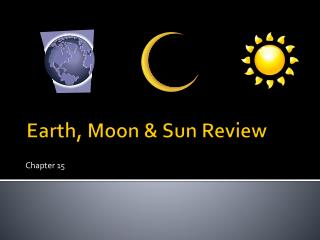 Chapter 15. Earth, Moon & Sun Review. What is this phase of the moon?. a. Third or Last Quarter Moon b. Waxing crescent Moon c. First Quarter Moon d. Full Moon e. New Moon. The rotation of the Earth on its axis causes . . . a. a month b. a year c. a day d. a season

The Earth’s Moon - . motions of earth’s moon. revolution of the moon around earth affects: phases of the moon, tides

Earth, Moon, and Sun - . section 1: earth in space. guide for notes. what causes day and night? what causes the cycle of

Earth, Moon, and Beyond - . day and night. the sun is the star at the center of our solar system. it gives off energy.

Earth Moon and Sun Interactions - . lunar and solar eclipses. a lunar eclipse occurs when the earth passes between the

Earth, Moon, and Sun Interactions - . the moon. the moon completely revolves around earth in 27.3 days the near side of

Earth Moon Sun System - . earth’s motions!. rotation. turning or spinning of a body on its

Earth’s Moon - . the moon rotates as it orbits earth . the pull of gravity keeps the moon in orbit around the earth.

The Moon - . the moon is earth’s only natural satellite the moon orbits/revolves around the earth it is believed that