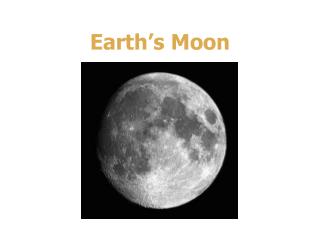 Earth’s Moon. Earth’s Moon. Origin and Properties of the Moon. The Moon’s Motions. Facts about the Moon… We see the moon changes its appearances and position in the sky with approximately 30-day cycle. Unlike the stars, Moon can also be seen during the day.

The Moon - . alabama course of study # 9 describe the appearance and movement of earth and its moon. identifying lunar

Moon Phases - . the revolution of the moon around the earth causes the moon to appear to have phases . why does the moon