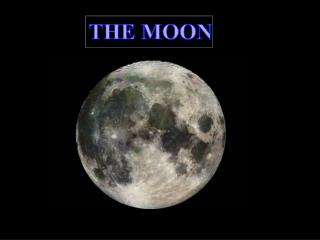 The Moon - . moons surface. first seen up close with a telescope by galileo in 1609 covered with craters, mountains, and

The Moon - . called luna by the romans, selene and artemis by the greeks, and many other names in other mythologies.

The Moon - . trey. what is the moon made of?. the moon is made rock. how does it move?. it spins arourd the earth. the

The Moon - . a look at our nearest neighbor in space!. what is the moon?. a natural satellite one of more than 96 moons

The Moon - . by rebecca. the moon is orbiting at about 2,300 miles per hour. the moon is slowly drifting away the moon

The Moon - . satellite:. a natural or artificial body that revolves around a larger celestial body. moon . a celestial

THE MOON - . the surface of the moon. it has no atmosphere, so a record of all the impacts has been preserved we know the

The Moon - . unit 5.5. surface. the outside part of something. spacecraft. a vehicle for traveling into space. lunar.

The Moon: - . geologic history and future exploration. what we knew about the moon before apollo. apollo missions.

The Moon - . arny, chapter 13. introduction. introducing the moon earth’s nearest neighbor is space once the frontier