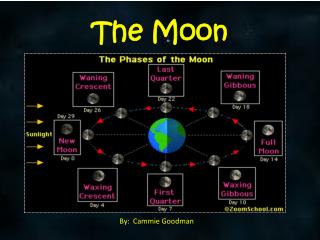 The Moon. By: Cammie Goodman. Facing up to the Moon. The moon orbits the Earth . It takes about a month for the moon to complete its orbit . Its orbit is nearly circular with a radius of about 380,000 km

The Moon - . the moon is earth’s only natural satellite the moon orbits/revolves around the earth it is believed that