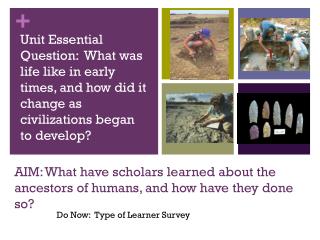 Unit Essential Question: What was life like in early times, and how did it change as civilizations began to develop?. AIM: What have scholars learned about the ancestors of humans, and how have they done so?. Do Now: Type of Learner Survey. Setting the Stage: Who are we?. 15 Important Lessons I Learned as an SEO Start up - It’s almost 2 years since i officially started seo hacker. i can

Where did human ancestors walk upright about 3 to 4 million years ago? - . a. nile river valley b. eastern asia c.

Things humans do that monkeys don’t do - . use your arrow keys to navigate. this presentation will lead you to

Pronoun Case Scholars Bowl - . rules of the game. rules: no talking out of turn. your team gets one chance to answer. you

Introduction to Ornithology - . cvm 6880 avian core. birds of the world. conspicuous and wide spread relationships with

Daoism Jeopardy - . the solution for humans. rituals and symbols. history of daoism. humans. the absolute. solution for

Maps, Gazetteers,Directories Presented by DeAnne Shelley - . the key word here is locate. how can maps, gazetteers and

Early Humans - . what is history?. story of humans in the past. what do archaeologists do?. hunt for evidence buried in