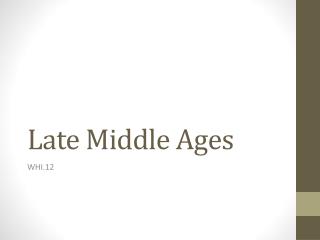 The Catholic Church in the Middle Ages - . violence, influence, and beauty. why was it so powerful?. it owned land it was

Chivalry: The Art of Being a Knight - . what does ‘ chivalry ’ mean?. have you ever been told to behave like a ‘

Middle Ages: The Roman Catholic Church - . warm - up. 1. how was the roman catholic church a powerful force during the

Europe in the Middle Ages 1000-1500 - . standard whi.12a the student will demonstrate knowledge of social, economic, and

MOSQUITOES - . if you would see all of nature gathered up at one point, in all her loveliness, and her skill, and her

THE ARTHURIAN TAPESTRY - . the diffusion of the arthurian legend in the middle ages. roman britain 1st-5th c. 1st-4th

Chapter 12 Child and Preadolescent Nutrition - . nutrition through the life cycle judith e. brown. definitions of the