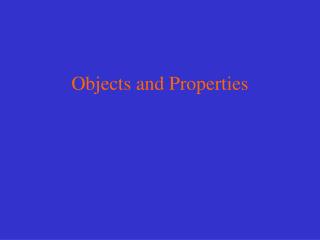 Objects and Properties. Objects : physical "things" in our environment Properties of objects those qualities that make an object what it is Referent (reference) how we view things due to our experiences our window to the world Objects and Properties - . objects : physical &quot;things&quot; in our environment properties of objects those

The Universe- Properties, Conditions, and Objects - . universe. big bang theory-other galaxies moved away in all

Direct Objects and Indirect Objects - . to understand this presentation, you should be comfortable with the the parts of

Classes and Objects - . object vs. class. a class could be considered as a set of objects having the same characteristics

Classes and Objects - . you will learn how to define new types of variables. composite types: review. ones that you

Classes and Objects - . per brand. what is a class?. a class in oz is a chunk (abstract data-type) that contains : a

Objects and Classes - . review: objects. in java and other object-oriented programming (oop) languages, the focus is

Classes and objects - . readings: 8.1. recall: objects and classes. object: an entity that contains data and

Objects and types - . typed languages = define a set of types in the language and assign a type to each expression in the

Classes and objects - . practice 2. basic terms. classifier is an element of the model, which specifies some general