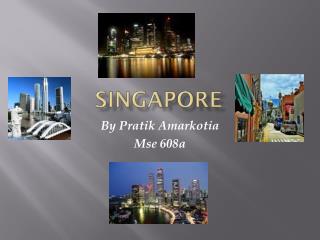 SINGAPORE. By Pratik Amarkotia Mse 608a. Singapore on World Map. Location: Southeastern Asia, islands between Malaysia and Indonesia The crescent moon represents a young nation on the rise. The five stars stand for Singapore's ideals of democracy, peace, progress, justice and equality.