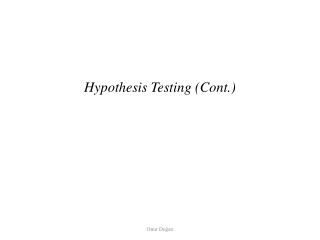 Hypothesis Test: Independence - . the table shows a random sample of 100 hikers and the area of hiking preferred. are

Umpire Rules Test (cont.) - 29. runner on 2 nd attempts to steal 3 rd . the batter swings and nicks the pitch that is

Hypothesis Test: Goodness-of-Fit - . a geico direct magazine had an interesting article concerning the percentage of

Test of Compassion - . introduction. what is observational research. r esearch method to observe people and animals in

Conducting a Hypothesis Test Using Proportions - . note: a proportion is the same as the percentage of the population.

Hypothesis Testing and the T Test - . first: lets remember z scores. so: you received a 75 on a test. how did you do? if