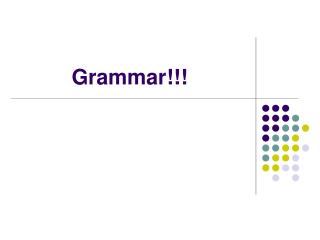 Grammar!!!. Are Grammar Lessons Enough?. A solid body of scholarly research has demonstrated that knowledge of grammar will not, of itself, improve writing style. Occasionally, where grammar lessons replaced time spent teaching composition directly, the grammar classes registered less gain.

The grammar gap - . dick hudson liverpool february 2010. plan. grammar in a normal world how we got our grammar gap

“On the Teaching and Learning of Grammar: Challenging the Myths” - . by diane larsen-freeman. grammar structures have

Grammar Unit Review - . directions. this game is played jeopardy style. each category is based on popular young adult

Advanced Syntax - Lecture 12: universal grammar. advanced syntax. in looking at english data, we have been building a