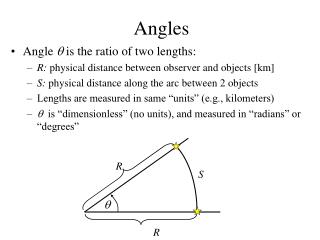 Angles Tri-angles Quad-angles - . you will need your think book. . review… an angle is … draw an angle with points a,

Angles, Angles Everywhere - . definition of an angle. ~ two rays with a common endpoint. right angle. a right angle is an

Angles - . look around the room. have you ever noticed all of the angles. the angles of corners, objects on your desk.

Angles - Learn to name and measure angles. angles. a line extends without end in both directions. example: line ab the

Angles - . conversions. def: a radian is the measure of an angle that cuts off an arc length equal to the radius.

Angles - . angle and points. an angle is a figure formed by two rays with a common endpoint, called the vertex. ray.

Angles - . angle. an object that has two rays (called sides ) with a common endpoint (called the vertex ). a. b. c.

ANGLES - . 3 rd grade mathematics (geometry) lesson. objective: by the end of this lesson, the students will know the

Angles - . angles. angles have two sides that share a common endpoint called a vertex of the angle. angles are most

ANGLES - . by randene. what is an angle. an angle is two lines or rays that meet at the point, or the vertex. each angle

Angles - . by melissa . what are angles? . angles are every where. some angles incloud acute, obtuse, right and strait.