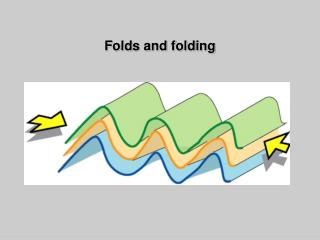 Folds and folding. Outline. Terms For Describing Folds Fold systems Fold geometries Mechanics of folding Kimematic models of folding. Initial Layer Cake. Convexity and Age of Beds . Anticline - a fold that is convex in the direction of youngest beds

Folds and folding - . in ductile processes, deformation is retained. plastic if permanent strain increases at same

FOLDS AND STRUCTURES DUE TO FOLDING

Folds - . by: michelle castaneda 1 st period geology. what is a fold?. folds are flat lying sedimentary and volcanic

FOLDS and FAULTS - . stresses in the earth’s crust. stress can be compressional , tensional, or shear. compressional

Folds - . read davis and reynolds, chapter 7. why is it important? fundamental to deformation of the earth’s crust;

Ben Folds - . biography jon dykstra. i chose ben folds because i, like him am a pianist and have always admired his work

11.2A Folds, Faults, and Mountains - . folds and faults . folds . over millions of years, stress forces can bend rock

Stresses, Faults, Folds, and Earthquakes - . types of stresses on layers of rocks:. types of folds anticline - an upward

Folds analysis techniques - . goal : to apply some of the basic geometric techniques for analyzing folds and refolded