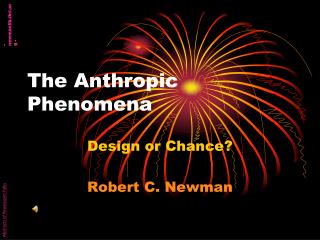 Anthropic Design Arguments and the Anthropic Principle - . tennant. what strikes tennant as most odd about the universe

The Anthropic Coincidences - . the anthropic coincidences 1. the existing nuclear forces are essential to the existence

Anthropic Principle - Although our situation is not necessarily central , it is inevitably privileged to some extent.

Anthropic Principle - . are there signs of a designer in the universe. anthropic cosmological

phenomena - . human mind. traditional. interpretation. this assumes that the phenomena are unchangeable have always been

Mysterious Phenomena: The Stonehenge - . by: lateef hicks jr. introduction. my presentation is about stonehenge . the

Wave Phenomena - . diffraction of light off a compact disc. interference pattern of water waves. constructive and