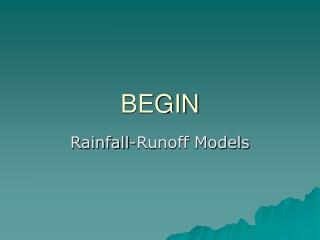 BEGIN. Rainfall-Runoff Models. Excess Precipitation or Runoff Volume Models. May be: Physically Based Empirical Descriptive Conceptual Generally Lumped Etc…… May not only estimate excess precipitation – hence, we will refer to them as rainfall-runoff models …. The Basic Process….