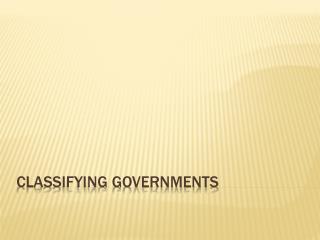 Classifying Governments. 1. Who Participates Autocratic vs. Democratic 2. Selecting the Executive 3. Geographic Distribution of Power. 3 Ways to Classify Governments. Autocracy- “self-rule” one ruler who arbitrarily rules and controls the people’s lives in the name of the people

Classifying Governments Who can participate? - . aristotle’s approach. ruler rules in the interest of: type of ruler

Classifying - . the alun school. when we classify things, we put them into classes or groups. there are lots of different

Governments - . who is in charge? oligarchy autocracy democracy. where is the power? unitary government federal

Governments - . i can define the different types of governments (democracy, autocracy, oligarchy, monarchy, and

Governments - . what are they and why do we need them?. what is a government?. the act of governing; the exercise of

Governments - Limited vs. unlimited walkabout activity and lesson. governments. make a list of things that the

Governments - . the quick and dirty. three types. basic government may be one of three types: economic who controls goods

Governments - . governments. communism- system of social organization  in which

Governments - . have basic principles that affect the way it serves its people. who holds all the power do you have all

Governments - . government. system of ruling the masses. sovereignty. the right to govern and the freedom to decide on

Governments - . for optimal viewing on the ipad , use the powerpoint or keynote apps. anarchy. a state of lawlessness and

DEMOCRATIC GOVERNMENTS vs. AUTHORITARIAN GOVERNMENTS - . the ultimate battle of good vs. evil… …sort of. main idea.

Classifying Organisms: - . biological zonation – based on where they live / lifestyle this is how ecologists talk

Classifying Triangles - . free powerpoints at http://www.worldofteaching.com. two ways to classify triangles. by their