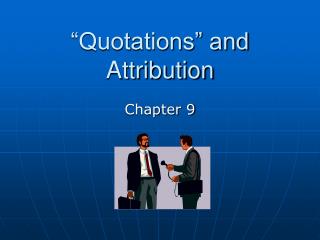 “Quotations” and Attribution . Chapter 9. “Why Use Quotes?” he asked. . Because quotations add color and interest to news stories by allowing readers to “hear” many voices rather than just the voice of the writer. Three types of quotes: Direct—present a source’s exact words

College English ( Integrated Course 4 ) - . unit 1: fighting with the forces of nature. text a: the icy defender.

Government and Politics AP Review - . important supreme court cases for the most part, information in this powerpoint is

Distributed Systems - . introduction to cryptography minqi zhou mqzhou@sei.ecnu.edu.cn. except as otherwise noted, the

Recursion - Based on chapter 7 of koffmann and wolfgang. recursion. famous quotations. to err is human, to forgive

Recursion - Based on chapter 7 of koffmann and wolfgang. recursion. famous quotations. to err is human, to forgive

Now that I know PowerPoint, how can I use it to TEACH ? - This work is licensed by patrick crispen to the public under