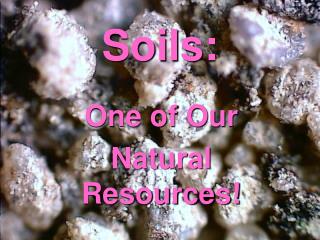 Soils:. One of Our Natural Resources!. Some call it dirt…..But it is Soil !!!. Soil is made of loose, weathered rock and organic material. The rock material in soil contains three noticeable parts: sand, clay, and silt.

SOILS Identify Basic Soils Properties - . tec c03-a01. why is soil important ?. it is the foundation for all types of

Classifying Soils - . mr. lawson. bellwork. what is different about the soil in az and the soil in il? . classifying

Part Six, Issue 19 - . soils and sustainable societies. objectives. after reading the assigned chapter and reviewing the

Botany 3214 - Soils - . soils associated with agriculture. agriculture began some 7000 years ago in mesopotamia