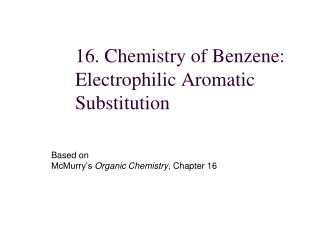 16. Chemistry of Benzene: Electrophilic Aromatic Substitution. Based on McMurry’s Organic Chemistry , Chapter 16. Benzene is aromatic: a cyclic conjugated compound with 6  electrons Reactions of benzene lead to the retention of the aromatic core

AQA organic reaction mechanisms - . click a box below to go to the mechanism. click here for advice. as. free radical