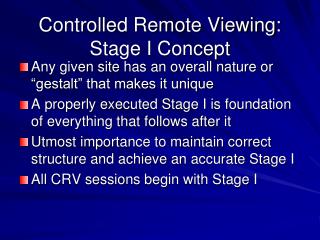 Controlled Remote Viewing: Stage I Concept. Any given site has an overall nature or “gestalt” that makes it unique A properly executed Stage I is foundation of everything that follows after it Utmost importance to maintain correct structure and achieve an accurate Stage I

PID Control of a Remote Controlled Car - John j. noegel purpose to become familiar with the operation of a handy board

COMPLEX - . sentences. if you use simple, compound, and complex sentences your writing will become more interesting.

Stage Management - . history . relatively new don’t have exact date on beginning of the position concept date back to

Bluetooth Remote Control - . using bluetooth and the rotation sensors in nxt motors, it is possible to create a